Whatever Happened To -
The Cotton City Jazz Band 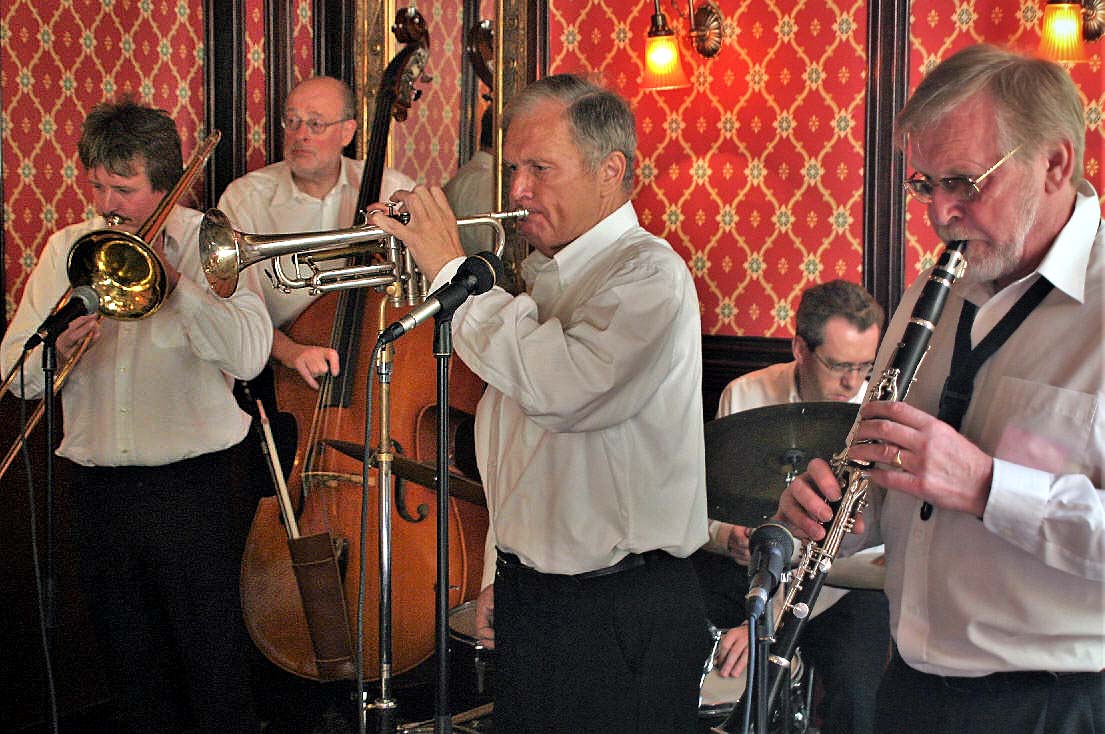 "I thought that I should let you know that founder member Doug Whaley and myself have sadly agreed to disband the Cotton City Jazzmen. The band played its final gig at Didsbury Cricket Club last Thursday and will play its last session at the Grant Arms, Ramsbottom, on the 14th September. The band's final gig will be at Bolton Cricket Club on the 16th of October.

We would like to thank you personally for the support that you have provided for our band and to all the others in the North West. I would also like to use this opportunity to express our thanks to our supporting audience and the musicians that have filled the gaps in the band over the years".

The Cotton City Jazz Band was formed in 1954 and was resident at the Brunswick Hotel in Bury. In those days, the band was lead by Doug Whaley and played around the Manchester jazz scene for four years or so before disbanding when Doug went to Oxford University. The name Cotton City has been used by at least two Bury based bands since those early days, with Barry Aldous re-forming the band and taking on the bandleader role in 1986. Barry played clarinet with the original band from 1956-57 before signing-up for National Service and was keen to keep the Louis Armstrong All Stars sound that Doug Whaley gave the original band. Doug agreed to join the band along with pianist Maurice Gavan who also occasionally played with the original band. The band played at the De la Salle Rugby Club for 10 years and was strictly a re-union band.

The final night line-up was:

Barry has played clarinet since aged 17 years when he first met pianist and clarinettist Maurice Gavan at a Blackburn jazz club. He has played tradition jazz on both clarinet and bass since the 1950's with the George Jackson JB and the Jackson-Bradshaw JB, the Rainy City JB, Cromwell JB, Panama JB and alongside Don Long. He as been fortunate enough to backed many well known musicians including Wild Bill Davidson, Bud Freeman, Roy Williams, Humphrey Lytleton, Chuck Conners.

Doug needs no introduction with regard to his background and experience having played with the best on many occasions. His recent health problems has restricted his playing activities and his place is now being shared with Ged Hone who also need no introduction.

Started on piano and recorder around the age of seven before taking up the flute and joining the Salford Youth Orchestra when in her early teens. Looking around for another instrument to play and, influenced by her dad who was a keen fan of George Chisholm, she chose the trombone. Among other inspirations were Frank Rosolino and Roy Williams as well as such as Chet Baker and Stan Getz. She soon mastered the seven slide positions and, whilst at college, began playing in a Big Band. One of the local pubs had regular jazz sessions featuring a mainstream group, the Jazz Bandits - led by Frank Fonseca. Suzanne was encouraged to sit-in. This gradually developed until she became a regular member. A financial analyst for a major company, she is at present, on maternity leave but still managing to keep up the practice so necessary especially on a brass instrument. Many young women these days are increasingly involved in both brass bands and orchestras but very few, as yet, seem to manage to encompass and develop the feeling for- and ability to play - jazz.

Dick Nancarrow: is a former member of the Don Long band. Dick has backed many fine jazzmen, including Peanuts Hucko, Harry Edison, Kenny Baker, Humphrey Lyttelton, Alan Elsdon, and Bruce Turner. He also did stints with the Manchester Panama Jazz Band, the Colin Tomkins band and Doctor Jazz. He's a forceful drummer with bucketfuls of swing.

Maurice is well known for his clarinet and piano playing as well as leading his own outfits. His jazz history lies in the main with the George Jackson band and the Smoky City JB. He has also shared the stage with Barry during the Cromwell JB years and with bands lead by trombonist Don Long. He has supported many great names over the years.

John is well known for his Gypsy style of playing but his breadth of experience and knowledge allows him style of band. With the Cotton City, he plays a solid rhythm and is appreciated for his featured solos - any tune, any key that's John.

Paul is in great demand as a bass player but also has the talent to play bass trombone with big bands in the area. He is familiar with all jazz genres which suited the Cotton City's repertoire in the latter years.

The Cotton City Jazz Band incorporated musicians of a high standard playing a varied program of Dixieland and mainstream jazz around the Manchester area.