Life long trad jazz fan. Now 62 years of age, Played trumpet in Trad Band whilst I was in the RAF stationed in Cyprus back in 1960/63., Band was called "The Stockyard Ramblers" I still listen to jazz, sadly I do not play anymore. Does anyone know the whereabouts of Alistair (Jock) Mackenzie, originally from Inverarie, he played Banjo, Don Cadwallader, originally from Wallasey Merseyside, his parents had a newsagents shop. He played Trombone. These are the only two members of the "Stockyard Ramblers" jazz band that I can remember. Can anyone out there help me?

Many thanks for your news letter. You may remember I contacted you some time ago to try and trace some former members of the band I played with in the late 1950's early 1960's whilst serving in Cyprus.  The Band was the 'Stockyard Ramblers'  To date I have only traced one member  trumpeter Barry Atkins, who played alongside me for 18 months.  Sadly  I was to find that he had passed away  some months before I eventually made contact with his widow.

Still I still live in hope that at 62 I may yet find some of the old players.

Last January you posted a request for information about Jock Mackenzie a former  banjo player with the Stockyard Ramblers . a band we played in during  our service in the RAF in late 50's early 60's.and I played trumpet.

Sadly  after a long and protracted  search, I was informed that Jock had died from cancer some two years ago.  I would like to trace his wife Linda if that is possible. Anyone that can shed some light on her whereabouts can email me on jinxyjones38@hotmail.com

Jocks last known band was The Mike Cole Band  playing in the Nottingham area.  Although I believe Jock freelanced most of the time.  Not surprising that,  because he was a superb banjo player, and a musician of considerable talent, who would be in great demand by many a Trad Band. 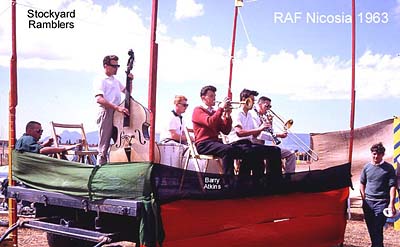 Interested in your site as I was doing a Google search for Barry Atkins who I served with in Nicosia.   It so happens I have the attached pic of the Stockyard Ramblers taken at a fete at RAF Nicosia in 1963 that you may be interested in seeing.