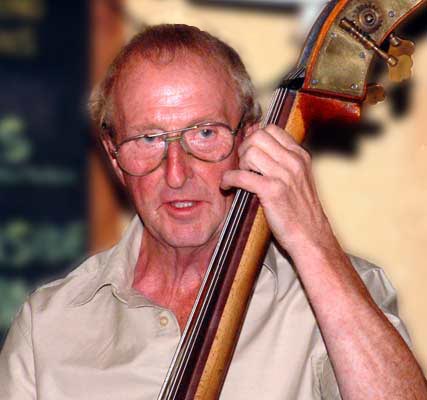 20/05/08 - I was saddened to get a call from Alan Duckles tonight to tell me that Malcolm Hall, bass player with the New Riverside Jazz Band, and the Sun Street Stompers, had died in Lancaster's hospice this morning. Malcolm was a great guy, who always had a laugh, shrugging off his latest illness with a "C'est la vie" attitude. He was a great supporter of this web site, both financially and as a reader, carefully filing away on his computer, all the News items that appeared on the site. Barbara and I will miss the little chats we had with him whenever we met up. More details when I get them. - Fred Burnett

The death of Malcolm has dealt yet another body-blow to live music in Lancaster. I first met  Mal at the weekly jazz sessions in the Moorlands Hotel in Lancaster, in the early sixties, when he was playing bass with Bob Moffatt- a happy  association which continued until Bob’s untimely death last year. Their Monday night sessions at Ye Olde John O’Gaunt were legendary.

For many years he was also resident keyboard player at the Melbourne Club in Slyne Road, where he had to cope with the well-thumbed and often near-illegible pads presented by visiting acts. This was an assignment which he described to me in graphic terms, as challenging in the extreme, but which he bore, as always, with his usual wry good humour, and, I’m sure, acquitted himself well.

He joined my band, the New Riverside Jazz Band, about eighteen months after its inception, and was a great acquisition, making the smoothest possible transition to the traditions of New Orleans from the Mainstream, which was his preferred style. In the same spirit, he became a tower of strength much more recently to the Sun Street Stompers. As well as his accomplished musicianship he was a wonderfully warm, kind and helpful friend to all of us. We all saw his suffering at first hand over the last few years, but he showed amazing courage and determination, always making light of his difficulties, and playing as well as ever until the end. He was a lovely man, a great musician, and will be sorely missed by us all.

(On behalf of the New Riverside Jazz Band, the Sun St. Stompers, and, I hope all who played in his company through the years.)

Malcolm Hall, a much loved jazz musician from Lancaster has died aged 69, after a lifetime of making music and making people smile.

Well-known as the swinging bassist of the New Riverside Jazz Band, the Bob Moffatt Quartet, and the Sun Street Stompers, Mal was a superb and dedicated musician, and a kind, generous and funny man. He performed until very recently, and never lost his enthusiasm or his extraordinarily energetic and cheerful approach to whatever he was playing.

Born on 6th July 1938 Liverpool to parents David and Florence (aka Daisy) Hall, Mal had two brothers Ron and Keith. The young family moved to Bowerham in Lancaster and Malcolm was educated at Lancaster Grammar School. Although academically bright, music was his passion, and, having already had piano lessons, tackled the violin, and begun playing the saxophone, he decided upon an army bandsman's career. He spent three years, mostly in Germany, including numerous tours with the 35 piece army band.

When he returned to the UK in the 1960s he took up playing bass, and teamed up with lifelong musical colleague Bob Moffatt, who sadly died last year. The Bob Moffatt Quartet played storming modern jazz, including a two decade Monday night residency at Lancaster's John O' Gaunt pub, where musical sparks flew between Mal and Moff to thrilling effect. Mal was also an accomplished vibes player, and held a ten year residency as the organist at the Melbourne Club in Skerton. A multi-faceted player, he tackled traditional jazz with equal fervour, and was a stalwart member of the Sun Street Stompers and the New Riverside Jazz Band, playing locally and at jazz festivals across the country.

Music was the driving force in Malcolm's life - he was a musician to the core of his being. He was also a highly intelligent man, who, as a mature student undertook a chemistry degree at Lancaster University, followed by teacher training at St Martin's. However, his friendly outlook, and practical nature led him to prefer retail and delivery jobs which allowed him to get out and about and meet people. In later life he joined the Morecambe and District Holiday Fellowship Rambling Club with his second wife Mary, a hobby which he tackled with characteristic thoroughness, by choosing the toughest walks in the highest places and doing them in the shortest possible time.

Mal doted on his twin daughters Cecilia ("Cils") and Rebecca ("Becky") and son David who he had with his first wife Jean. He was delighted by the recent arrival of grandson Cody. He proved a generous and kind stepfather to Jill and Vivienne, daughters of Mary, with whom he shared a long and happy second marriage. He passed away in St John's Hospice on Tuesday 20th May, after an illness which he bore with remarkable fortitude and humour. His funeral took place on Wednesday 28th May, including tributes played by his many musical friends. He will be remembered by all who knew him and heard him as a brilliant musician and the warmest and funniest of men.

"So sad.......... Whenever I turned up unannounced at those Lancaster  gigs, Malcolm always greeted me with a welcoming smile as if I'd just  come from down the road rather than having arrived from Canada. His  casual attitude always made me feel at home on my visits. I shall  miss him. In my original "Doom & Gloom" letter I may have been wrong in saying  the music would die with our generation, but I was right in regretting  that our generation of musicians & fans were gradually disappearing.   Each one of them is unique and irreplaceable."

"It was a sad day when Peter Eddowes rang me about Malcolm Hall. Over the years Malcolm and I have had many long chats on the phone. I depped for Malcolm - He depped for me etc. We met him a few times on some of our visits to Lancaster venues. Always friendly and never a bad word about anybody. We will all miss him. God Bless. "

"Sad news about Mal Hall. We go back over 50 years, we both went to Lancaster Royal Grammar School, worked at Burtons in Lancaster for a short while, we both went into military bands in 1956 for 3 years. Malcolm played tenor sax in those days, as well as piano. I played clarinet and baritone sax as well as piano. We continued playing music after the forces, with Moff, George Niven & co. I will miss him dearly, he was an extremely talented musician, his vibraphone playing was always appreciated, but of course he settled on acoustic bass, which he was a master. His talents and bubbly personality will be greatly missed. Fortunately I have recorded cassettes and videos of his music, so I can always go back to that for memories. Love and best wishes go to Mary."

"Like everyone else I was saddened to hear of Malcolm Hall's death. I listened to him in various bands and also played alongside him many times over the last fifteen years and it was always a real pleasure; his sense of swing, enthusiasm and superb musicianship helped us all to play that bit better. One gig I remember with particular affection was a lunchtime trio at the Wagon and Horses, Lancaster with Mal playing piano, myself on guitar and Delia singing a programme of Bessie Smith numbers. I don't need to tell you how honoured I felt to be invited to join two such accomplished musicians. Above all he was a really nice guy and I shall miss him."

28/05/08 - Around 150 people arrived for the funeral of Lancaster bass player Malcolm Hall today as the New Riverside Jazz Band were playing 'Just a Closer Walk With Thee'. Sue Parish then began by singing Pennies from Heaven, and the New Riverside Jazz Band played one of Malcolm's favourites, Creole Love Call. Bass player and long time friend of Malcolm's, Pete Deeley, gave some amusing anecdotes and an insight into Malcolm's sense of humour.  It was standing room only with some people unable to get inside the crematorium chapel, so it was not surprising that everyone I met spoke of Malcolm as "a lovely fellow". There was an invite for everyone to attend the Robert Gillow afterwards, where the New Riverside Jazz Band were playing, but band leader Alan Duckles was delayed, as he hardly had time to put his cornet away before dashing round to the entrance for the next funeral, which was for an old friend of his. "It comes to something when you start doing them in tandem", said Alan. The Gillow was also packed with people sharing fond memories of Malcolm and his music.  Many musicians who had worked with him over the years were present, along with his family and many friends.  The band played spiritedly throughout the afternoon, with lots of sitters in paying musical tribute to a man who gave a lot of joy to a lot of people, and whose memory will continue to make people smile for years to come.