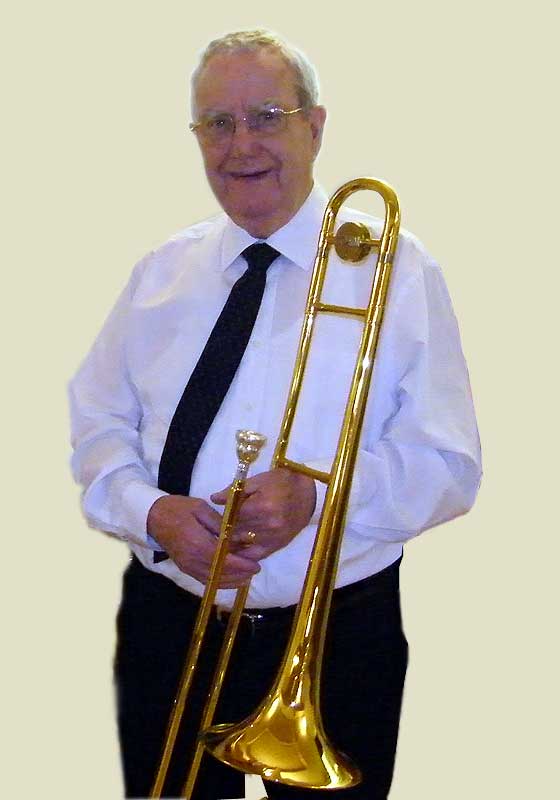 I was sorry to learn today that trombonist Cyril Lyons, had passed away, with his family around him. Cyril was playing with the Lune Valley Vintage Jazz Band until he had a fall in March this year and cracked a vertebra in his back, and together with other health problems, it forced him to retire from playing jazz. Cyril started out playing German marches on a euphonium in an Irish army band!  He told Sue Parish (no doubt  with that cheeky Irish grin) in an interview, "I was born in Dublin, and joined the Army school of music there when I was 14. It was run by pre first world war German army bandmasters, so we played regimental marches written for the Kaiser's army! They gave me this enormous German trombone, but I was only a little guy and my arms weren't long enough to play it. So much to my disgust they gave me a euphonium instead.".

I was so sorry to read your piece on Cyril passing away. I got to know him over the last few years and not only was he a great trombone player, he was a very funny man... I enjoyed his company and he will be a sad miss. Please give my condolences to his family.

So very sorry to hear about Cyril Lyons, he was a lovely person and I remember one of the gigs at the Windermere Hydro, depping with my band and his solo of "Georgia On My Mind" was the best I have heard, he will be sorely missed by all who knew him.

Sorry to hear of the passing of Cyril Lyons. As previously mentioned, he was a lovely man. He came to our jazz evening for the first time last year when we had the Keith Nichols Hot Five and he couldn't believe the quality of the music literally on his doortep. At the end of the evening, he immediately booked tickets for the Original Guinness Jazz Band and enjoyed talking to his fellow compatriots with his usual sense of humour. He had planned to come again earlier this year, but illness prevented his presence and I know he was terribly disappointed.

On behalf of Heysham Heritage Hall, may we offer heartfelt condolences to his wife, Margaret, and all his family.

Cyril Lyons... one of the nicest, kindest people I have ever had the pleasure to meet. It was an absolute honour to know and work with him for twelve years and I shall miss him terribly. Condolences to Margaret and the family.

Very sad to hear about Cyril. We had some good times together with The Festival Jazzmen. I've also been a "Dep" with The Lune Valley" Cyril was a great character and will be missed. Please pass on our condolences to all of his family. God bless,

So sorry to hear of the passing of Cyril Lyons, may we also offer condolences to his wife and Family. 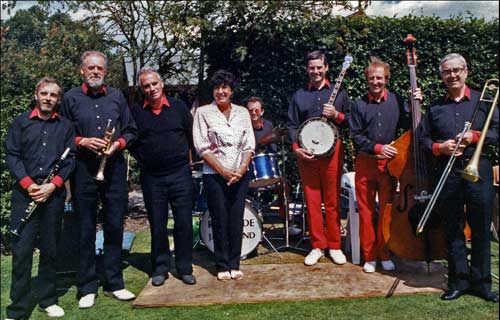 It's hard to believe that Cyril is no longer with us. I first met him in the late seventies, and admired his ebullient playing and his lively sense of humour. He came to my rescue in the mid-eighties, when my trombonist left the band suddenly, and he agreed to help us out in addition to his commitment to the Lune Valley Vintage Jazz band. The arrangement lasted, despite the complications involved, for some six or seven years, until we eventually found a suitable replacement {no easy task!} I also owe him an undying debt of gratitude for his crucial help and initiatives in organising the memorial concert, in aid of the local Hospice, for Delia Glaister and Malcolm Hall, both members of my band, and of course old colleagues of Cyril, in October 2008, which raised over £1300 for the charity. He was indeed a lovely man, a fine musician, and always a joy to be with. We shall all miss him sorely.

Alan Duckles,
on behalf of the New Riverside Jazz Band.

Cyril Lyons was a fine trombonist and was with the New Riverside Jazz Band for some years. Born in the Emerald Isle of course, he had played there in many styles of bands before he came to England, and no doubt he was in the extremely popular show bands that played everything from 'Rock and Roll' and Folk Music to Jazz.  I remember doing a dep with The Lune Valley Vintage Jazz Band at a wedding and one of the guests asking for Irish songs. We all looked perplexed, but not Cyril, he went into them with gusto and we just ambled along in the background as best we could.  I will miss him coming to my Sunday gig at The John O'Gaunt in Lancaster, he was very welcome guest and popular with the audience, farewell Cyril.

On behalf of the Yarl River Jazz Band I would like to add our condolences to those already submitted on your site. Cyril sometimes depped with our band, and always played with flair and passion. He was a great player and good fun to be with. We will all miss him.

I've been away for the last week so haven't had a chance to let you have the band's thoughts on Cyril's passing. Not easy to sum up in a few words, he was a great character and put much unseen effort into keeping the LVVJB going. Anyway, here goes:

Cyril was warm, generous and, like all true irishmen had kissed the Blarney Stone. He loved his family and his music. To play in a band with Cyril was to have a good time. He played with drive and enthusiasm. Should the band on a long gig begin to fade a little you could always count on a punchy solo from Cyril to bring it back to life. He enjoyed a laugh and a joke, and football. Many's the time that discussions about Man. United had to be curtailed by a tap or two on the rim of the snare before we could launch into the next number. His time in the Showband came through when, playing at a function a waltz was called for. We may have started with 'I'm Forever Blowing Bubbles' but then Cyril would lead us into 'I Belong To Glasgow', 'Ramona' and goodness knows what else before returning to the initial melody.

He first talked about having to give up playing two years ago but, fortunately for us determined to keep on playing for as long as he could. Latterly it was clear that it took all his resources to do it but he would say that while he was playing he felt fine, with no pain or discomfort.

The Three Tenors (trombones) play a tribute to Cyril following his funeral service.

"When You And I Where Young Maggie" was one of his favourite vocals. 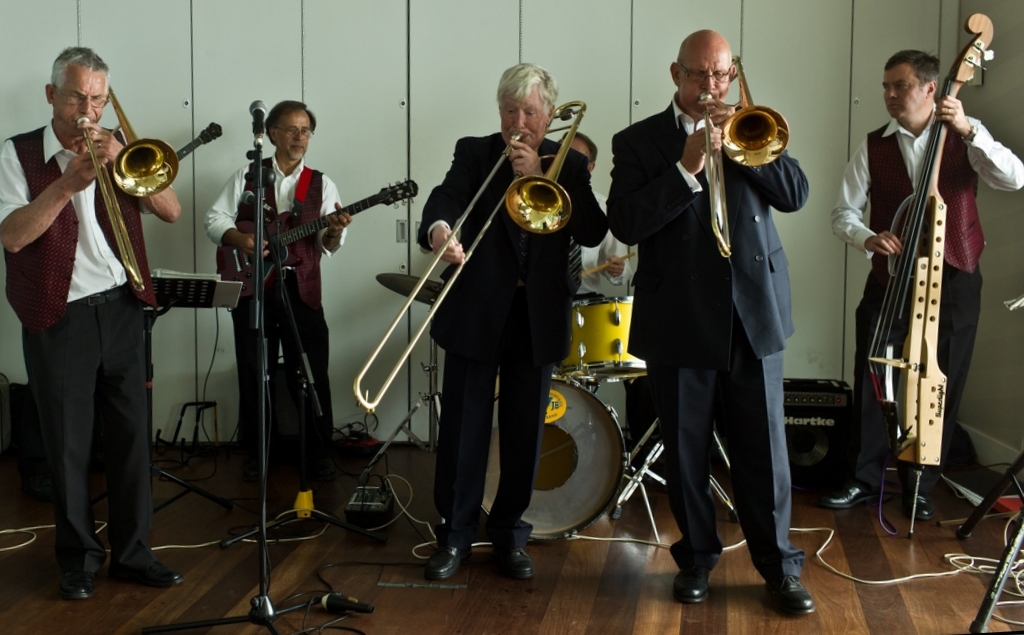 We finally said goodbye to Cyril on Monday, and I think we gave him the send-off he wanted. He had left instructions for the music he wanted played at his funeral and we played it! From his entrance into the church to the strains of 'Over In The Gloryland' through the service and then a dash to the Crem' to play 'Just A Closer Walk With Thee' to his final choice: 'Get Out Of Here And Go On Home'. Afterwards family, friends and many musicians repaired to Morecambe's Midland Hotel to eat, drink, make more music and swap reminiscences of Cyril until we were all politely asked to Get Out Of Here And Go On Home! A sad occasion but a sprinkling of jazz lightened the atmosphere no end.

I just wanted to write on behalf of the family and thank everyone for all the kind words and thoughts they have sent through about Dad. It has been lovely to see the tributes, and to hear about the side of Dad’s life that we all knew was so important to him, but that we didn’t really see that often. As several people have said, Dad’s two great loves in life were the family and his music and they came together so well at his funeral. I would like to thank all the musicians who came along to Dad’s funeral and played, it made the whole day incredibly special and moving. My husband said, as they were carrying the coffin into church they didn’t know whether to laugh or cry when the music started. That feeling summed up the whole day and whilst we all shed tears, we also all smiled and chuckled at moments throughout the day – it was strange to hear ‘Ice Cream’ sung properly, after so many years of Dad’s version whenever ice cream was mentioned by anyone in the family! So to the whole Jazz community who have sent their thoughts and sympathies – and in particular to the Lune Valley and all the musicians who came along last Monday – a big thanks. You ensured that Dad got exactly the send off he always wanted and we all ended the day with tears in ours but smiling and remembering Dad in the best way – with a trombone. 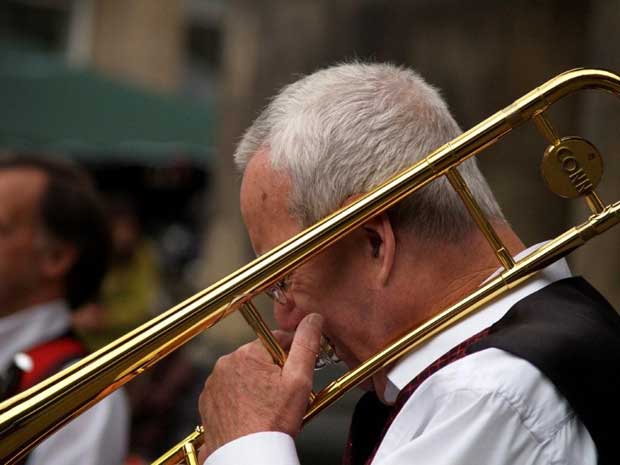