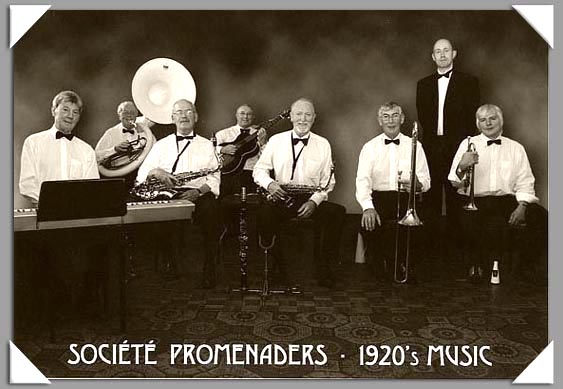 Colin Ball has reformed and renamed his band, which is now known as "Colin's Metro Swing". The style remains essentially arranged Dixieland Jazz, but the change from banjo and sousaphone to guitar and string bass has given the rhythm section a lighter, more swinging sound, which is also essential when occasional forays are made into mainstream and later styles of music!

Colin Ball, the well know multi-instrumentalist, started writing arrangements for a 1920's style "hot jazz" orchestra around 1984. Initially, he transcribed from recordings by "The Wolverines" and similar bands, before writing his own original charts.

After working with several professional bands, as both arranger and musician, on either cornet, saxophone, or tuba, he formed The Société Promenaders early in 2004. This band has a four piece front line, the minimum necessary to get the sound of an authentic 1920's combination. The standard dance band of those days comprised three brass and three saxophones. With the Promenaders' line-up, the original 20's printed arrangements can be played, as well as Colin's own arrangements written in the same idiom.

The band members are experienced readers and are also accomplished ad lib soloists. The front line players are underpinned by an all-star rhythm section. Neil Alcock is an outstanding vocalist who has appeared in leading roles in many famous musical shows. His voice and persona are ideally suited for the music of the 1920's.

The band aims to achieve the highest standards of musicianship and presentation, with the objective of featuring regularly at private functions, concert and on cruises, plus the added aspiration to TV and film appearances.