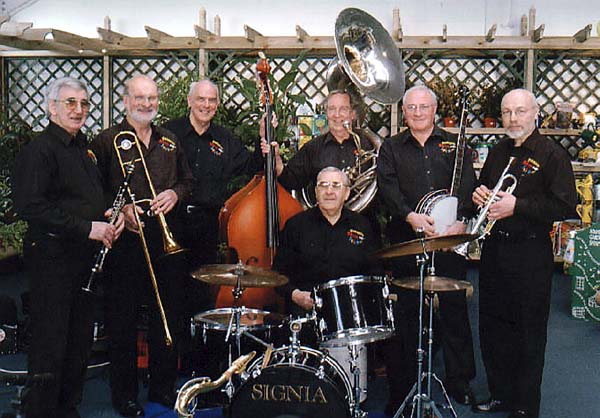 The Raikes Paraders Jazz Band wasn’t formed overnight- it wasn’t started the next night for that matter either. In fact the pride of Blackpool’s Golden Mile took root at a jam session at the home of one of the country’s first jazz clubs, the Raikes Hotel on Raikes Parade, Blackpool. The “jamming sessions” were chaotic. Anyone arriving with an instrument could join in, with the result that some nights it could be a trio and the following week a “big-band”. The results were not always good

The regular Wednesday night jam sessions, involving scores of local musicians, suddenly came to a halt due to a change of landlord some 6 years later. From this relative cacophony five of the “jammers” broke away and a new band was formed from the ashes. It seemed logical that the band should take it’s name from the venue that created it, and the Raikes Paraders Jazz Band took the plunge, and the stage, for the first time in 1985.

Hardly an overnight success story. But today, twenty years on, the seven-piece band which it is said, plays foot-tapping Dixieland jazz with popular tunes from the 20’s and 30’s and a measure of humour thrown in, is as much a part of the local scene as Blackpool’s famous Tower. A “Raikes Progress” to be proud of.

The band currently have two residencies, both monthly, at the Norbreck Bowling and Tennis Club and the Wagon and Horses, Bent Lane Leyland. They have frequently appeared at the Albert Hotel in Southport, the Whitewater Hotel in the Lakes, and the Roa Island Yacht Club in Barrow.

"The Raikes Paraders no longer plays anywhere. Our last gig was more than twelve months ago and so I think the band can be said to have finished!". - Roy Freeman