I just found out on Monday 28th April, that our dear old friend and colleague MIKE GILMAN (one of the most outstanding Jazz drummers in Manchester) passed away while watching TV and preparing a meal in a microwave oven (which thankfully switched itself off, thus preventing any further tragedy), on Saturday 26th April 2008. Pauline, his fiancée of two or three years found out when fellow residents at Mike's sheltered accommodation flat couldn't get an answer from him. They usually check on each other. They became anxious, called the person in charge at the property, went in and found him sitting in an armchair, as if asleep. He was, of course, already dead. He is in the care of the Coroner at the moment, as the cause of death has not yet been established, although one could guess that it might have been yet another stroke. Mike was about 69, because he was some eighteen months younger than me. 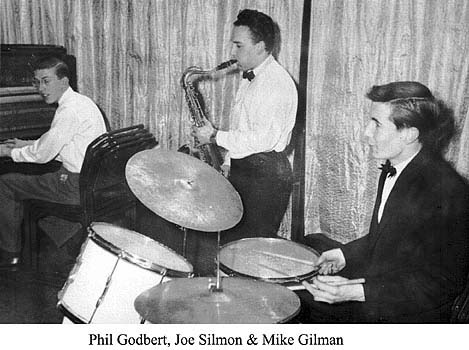 It was about 1954-55, when Mike, Geoff Wilde (trumpet/vocals, late of the Savannah J/B), Alf Holliday (trumpet) and me, all bought our first instruments and started out playing Jazz, all in that same timescale. We practised in the Stationery Office of Sparrow, Hardwick's (Textiles), Manchester, every lunch time. Mike used to giggle uncontrollably whenever my Simple System (high pitch) clarinet let out a squeak - frequently in those early days. We all worked in different parts of the firm, except Geoff and Alf, who were Stationery personnel. After some tentative gigs at St. John's School in Chorlton-cum-Hardy, near Mike's home, I got conscripted into the Royal Air Force and lost track of the lads in the makeshift Jazz group.

Meanwhile, Mike, wasting no time, became determined to be a top drummer, adopting a seriously professional attitude. After a long series of lessons with one of the top local drummers - Ken Leyland - based at Mamelok's Music, Oxford Road, All Saints, Mike's technique improved almost overnight, and he began to develop his own style. He also idolised Louis Bellson and very quickly leapt streets ahead of the rest of us. On my demob from the RAF in January 1958, Mike and I teamed up again. Alf and Geoff had gone their separate ways. Following a multiplicity of gigs, Mike had become fiercely proficient. Nevertheless, we both joined Phil Godbert's Jazz Band, based in Phil's Dad's garage in Urmston. We practised, got a lot of gigs (mainly dances with a lot of Jazz content). Meanwhile, I had discovered the local Jazz scene and got more interested in that kind of serious, strictly Jazz work. After some work at the Thatched House, Cross Street, home of the famous Jazz Aces, the earlier Saints Jazz Band, etc., finding that there was a Wednesday night available and by now beginning to be known myself, thanks to Alan Stevens's articles in the Manchester Evening News and Chris Lee's Oldham Evening Chronicle Jazz column, the boys in Phil Godbert's band - including Phil himself - magnanimously renamed the band Joe Silmon's Jazzmen because I was better-known. The lineup was: Frank Baxter (cornet); Paul Medina (trombone); myself (clarinet/tenor sax.); Gerry Cambridge (banjo); Phil Godbert (piano); Malcolm Simpson and later Pete Smith (d/bass) and Mike "Drumnastics" Gilman (drums). By the end of 1959, the Thatched House ceased to be available to even the famous Jazz Aces, so the band moved to another well-known venue - the Black Lion Hotel on Blackfriars Street, just in Salford. There, Mike really outshone the rest of us with his incredible technique on drums. At various stages of the band's development, we had been augmented by Howard Murray (reeds) and Howard Burrows (trombone), who also played at the RAFA Jazz Club in Sale, Cheshire, in Art Riley's and Alan Yates's bands. At one time the famous NDO (Northern Dance Orchestra) drummer, Bob Turner, joined the band for selected gigs. By this time Mike Gilman had turned professional, and was on 'real' money in Jersey (approximately, 1960).

I left the band in 1960 to join two "splinter groups" of the Jazz Aces (Ken Parkinson's and Dizzy Burton's) and I later discovered that Mike Gilman was making a real name for himself in several bands and trios, moving swiftly towards night-club class work. He went to sea with a quintet; did several voyages, and then procured trio work in Jersey, doing both Summer and Winter seasons there with the Stan Martin Trio. He learnt the trumpet, played it with the trio, sang many vocals and developed his talents as a compère, generally going from strength to strength. While in Jersey, he backed saxist "Boots" Randolph, Red Holloway and other greats from the USA during the Jersey Jazz Festivals, appearing regularly with the Stan Martin Trio on Channel TV. Returning to the cruise-liners in the Caribbean, Mike was earmarked by Turk Murphy, who had heard him with the ship's band and wanted him in his own excellent band. Mike did some gigs with Turk's band in the USA and on ships, then, homesick, he rejoined Stan Martin's trio for work back in the Manchester/Salford area. By now, the very well-known Stan Martin Trio (with Stan on piano, Brian Wilshire on double bass) had moved back into the realms of cabaret with 6-nights a week residency at The Talk of the North, in Eccles, where the trio remained until approximately the end of 1967. Next came the Löwenbrau Bier Keller, Piccadilly. I was based there with an "umpah" trio, until I became ill through some rather intensive passive smoking. I passed the work to fellow reedman Alan Tomkinson. Alan did a great job, introducing his own big bands, departing from Umpah music and playing tunes from the albums of Glenn Miller, Duke Ellington, Count Basie, etc. The beer-swilling audience, mostly consisting of the Manchester United fans who, in my days, nightly used to throw sharpened old pennies at the Umpah trio's legs, if not the occasional litre pot (full), loved the new sounds being produced, while when I was still with the Umpah trio, the wild women in the audience did their best to feel our partly bare lederhosen-clad legs as we walked through the auditorium for our beer breaks (and on the way back! Somebody had to do the job!). So, perhaps Alan had introduced a modicum of civility to the Keller's wild female audience.

Mike was, by now, out of work. His wife, Brigitte (an attractive German national) had applied for a job as Commère at the Bier Keller, and got it. Unfortunately, she took ill at the crucial time of her debut and Mike, a seasoned compère, stepped in. Brigitte thought that Mike could do a better job, earning better money as a man, and left him to it, especially as they now had baby Norman to feed. Norman became a mountain-climber later, but sadly estranged from his Dad after the divorce. Mike noticed that a new drummer was a pretty obvious requirement and, following a persuasive conversation with Bandleader Alan Tomkinson, he combined his superb drumming skills with his now natural crowd-pulling talents, trumpet-playing and singing (impersonating Louis "Satchmo" Armstrong), in Jazz-based bands of varying sizes and styles, as put together by Alan. These were all automatically boosted by the superb orchestrations of guitarist/composer/arranger Roy Davenport, to retain audience interest at the Keller - which he did with resounding success. Mike continued working for the brewery there and at other venues, including a famous keller at Batley, near Leeds, Yorkshire.

Between the 1980s and up to recently, following several strokes which, thankfully and much to Mike's delight and ours, didn't leave him paralysed, he continued working on cruise liners and in land-based gigs doing the things that he knew best, always striving to improve and being as thoroughly professional as possible about his work. He has been playing great drums right up to the time of his untimely death on Saturday.

The Funeral will start with Requiem Mass, Tuesday, 13th May, at 12:30, at St. Anne's Roman Catholic Church, 1537 Ashton-Old-Road (A635 out of Central Manchester), Fairfield, Manchester M11 1GR, 100 yds passed crossroads with Fairfield Ave., right, & Manshaw Rd., after Rosina Street which runs (on right) into the A635. St. Anne's Church is on the left hand side, immediately after a pub., 'The Grove'. There will be a reception, after the funeral, at the flats where Mike lived: Victoria Court, Brigham St., (off Victoria St.), M11 2YA, where memorabilia will be displayed, as arranged by Pauline Harrop, Mike's fiancée. There is no limit to guests, everyone is welcome; numbers are needed. Jazz playing: not yet decided, subject to Pauline and a female cousin of Mike's (Anne). Flowers: not yet decided. Will update these two aspects a. s. a. p.

The area and the nation have lost an amazingly talented entertainer as well as a highly skilled percussionist. Our old band colleagues, and I, in the old Phil Godbert Jazz Band (which later became Phil Howard's Jazzmen) and Joe Silmon's Jazzmen have lost one of the kindest, warmest-hearted friends possible. The loss suffered by Pauline, Mike's fiancée and his cousin Anne, is naturally a much greater loss than ours. May the Lord look after Mike's soul now (he was a fervent Roman Catholic) and may He bring comfort to Pauline and Mike's remaining family, however estranged some are through divorce - which occurred twice. I hope someone reading this will pass our condolences to Mike's son, Norman, too.

Thank you, Mike, for coming along to my 70th, and for your generous gift, that I am now unable to return in equal measure on your next birthday. Have a great afterlife.

Joe Silmon-Monerri and your old pals in "Joe Silmon's Jazzmen" - Class of '59.