Len Storey joined Annie`s Saints and Sinners about 8 years ago. He loved playing to the schools in particular. He was also a  member of The Riverside Jazzmen based in . He would travel almost anywhere if he was asked to play and did a lot of dep work. He was a familiar figure at jazz festivals in Keswick, Upton on and Bude. He organised the “Charlie Moore Jam Sessions” at Upton for the last three years and was the regular bass player in Dennis Armstrong`s guest sessions in Keswick. In between these sessions he could be  found busking with other musicians raising money for charity. He really was a lovely man and will be missed by a lot of people. 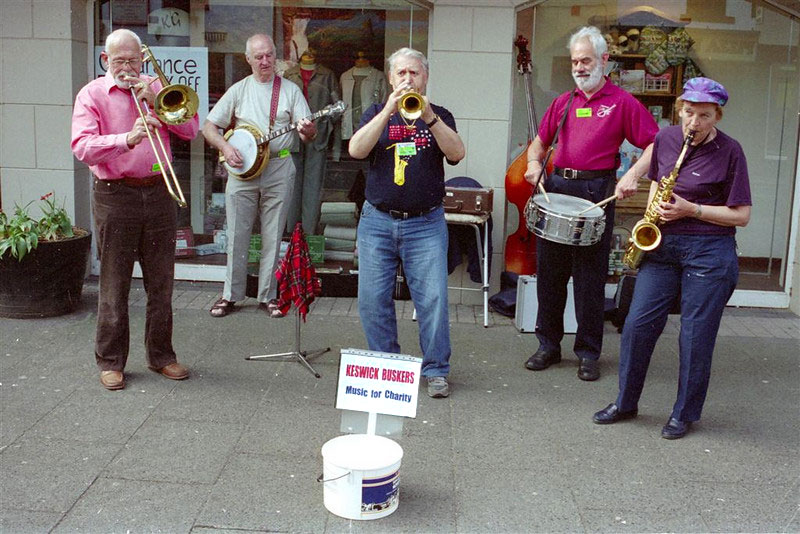 His funeral was held last Tuesday April 24th in Holmbridge with a parade along the main street with a big turnout of musicians. He had requested that there should be a party afterwards which was duly arranged by his family. Jazz was played all afternoon!

I have scanned the details of his life which were in the leaflet given to everyone who attended the funeral which will probably give you a better picture of Len than I could ever do!   What a shame you never  met him!

As many of you will know Len Storey was a very well known figure on the Big Band and Trad Jazz scenes.

He died on 15 April in the Huddersfield Royal Infirmary at the age of 80 but was still playing in venues around the North of England up until a few months ago.

Born close to the centre of Huddersfield Len started playing the cornet at the age of eight with the Huddersfield Railway Band. He showed such promise at an early age that band members chipped in to pay the dentist’s bill when he damaged his tips and teeth in a bicycle accident. (He was actually running an errand for the band leader at the time!) One of his earliest performing debuts came before the second war at Honley’s Hope Bank pleasure grounds then known as the “Blackpool” of Huddersfield and a popular local resort. 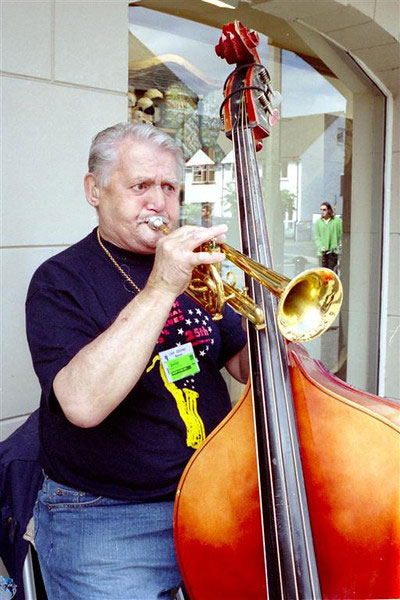 Best known as a trumpet player, Len formed his first dance band “Len Storey and the Modernaires” at the tender age of seventeen while serving in the Home Guard. After call-up he continued playing during his war-time service. On return to “civvy-street” Len joined the textile industry to earn his main living but still played for several different local bands in his spare time.

Len married Allison Hoyle in 1950 moving to the Holmfirth area where they brought up three children - Richard, Andrew and Diane all of whom were very proud of their musical Dad. He continued to expand his musical abilities and in addition to the trumpet and cornet learned to play the double bass, clarinet, flugelhorn and drums.

Dance bands were still very popular in the 50’s and 60’s and the “Len Storey Quartet” were a popular feature of many dance halls and working men’s clubs in the Huddersfield and Holme Valley areas. In the 1970’s Len experimented with the Country and Western sound becoming a key member of “Ben Lee Rivers & The Hoedown”, a band well known on both sides of the Pennines.

Sadly Len lost his wife Allison in 1991 and then threw himself into the Trad Jazz scene becoming a regular and well loved performer all over the UK especially at the important Bude, Upton and Keswick jazz festivals. He even spent time in the USA playing in the home of jazz, New Orleans as well as San Diego in California. Many Huddersfield people will remember Len playing on the “Jazz Train” running on the Penistone line. Although not interested in politics Len also played on many of the “Green Express” excursion trains organised over the years by the Huddersfield branch of the Green Party.

In later years Len Storey played with the U3A Band, Nytebeat, Honley Dance Orchestra and even appeared in Last of the Summer Wine on the same stage alongside Norman Wisdom.

Given the chance Len would play music anywhere and, also given the chance he would have the collecting bucket out raising thousands of pounds over the years for local charities. Len loved children and among his greatest pleasures was playing with “Annie’s Saints and Sinners Band” which introduced live music to schools all over the north.

Although suffering from prostate cancer Len was still playing the double bass and trumpet up until a few months ago. He delighted in being able to perform at his 80th birthday party last September but sadly passed away peacefully at the Huddersfield Royal Infirmary on Sunday 15th April 2007.

or go to my Home Page at
WWW.JAZZNORTHWEST.CO.UK