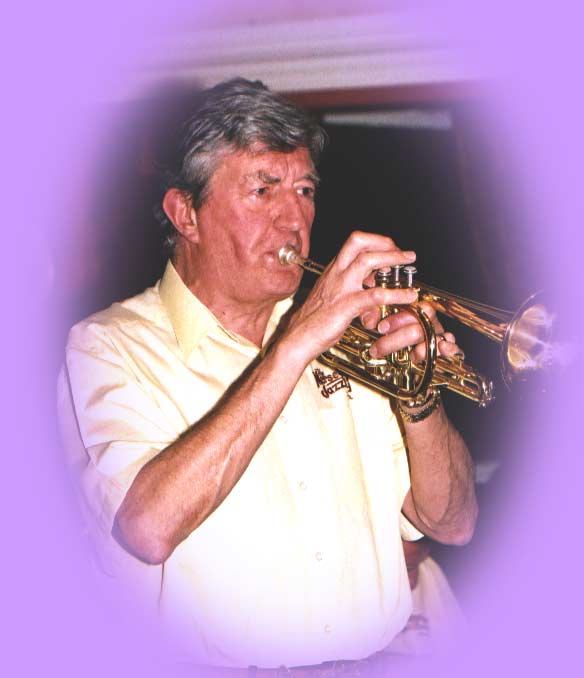 02/10/07 - Tony Davis has just rung me up to tell me that Merseysippi Jazz Band founder member, John Lawrence, passed away peacefully late last night. Although it wasn't unexpected, it still comes as a sad blow. John, who had been ill for some time, took the decision to retire from playing in January this year. Barbara and I shared an evening with John & Jasmine at the Rhythm Station in Rawtenstall a few years back when we went to hear Campbell Burnap play. Campbell had been staying with them, and this was by no means unusual. Many musicians over the years have been guests at their house enjoying their generous hospitality, and they will all be saddened by this news. John was a real gentleman, and he will be sorely missed. Our thoughts go out to Jasmine at that this very sad time.  - Fred Burnett

"Hi Fred: Hugh Potter just told me about John, then I got your email. Really is very sad news. John was the best in every way. A big loss to an enormous number of people. Our thoughts are with Jasmine".

I'm much saddened by the news of John Lawrence's passing, and I agree with your email message that it is a sad blow. John was a lovely man and a nice trumpet player, and I had a very nice time staying with him and Jasmine on one of my UK trips a few years back.

I first met up with John and the Merseysippi guys at Sacramento Jazz Jubilee, when I was playing there with Melbourne's 'Creole Bells'. The 'foreign' bands (like us) all arrived a few days early and did various gigs around the area to publicise the Jubilee, and then on the night before Jubilee opened we all went to hear the Merseys play at the Bartenders Backyard. I had the horn with me, and - although none of those guys knew me at that stage - I decided to ask for a sit-in.

So I approached the two Johns, Higham and Lawrence, and asked if I could sit in with the band. John Higham thought it would be OK, but he would have to nominate the tune, he said. When I asked what he'd like us to play, he said, 'Potato Head Blues', and you'll be playing third trumpet. I agreed, so we played it, and brought the house down!

Once they knew I could play a bit we all became firm friends, and in fact repeated the performance in 2001 when I was in UK with the 10th Avenue Band. I kept up a spasmodic correspondence with some of the Merseys, and it was always a joy to hear from them - and never more so than when they made me an Honorary Member of the Merseysippi Jazz Band. The only other two such memberships were given to Leon Oakley and John Barnes (who, to my regret, I have never met).

So, it was both an honour and a privilege to have met, played with and stayed with, John Lawrence - truly one of Nature's gentlemen. He'll be sorely missed.

I was very sorry to learn of the death of John Lawrence, a gentleman in every sense of the word and a very gifted musician. I can see him now in my memory, tall and straight-backed, with his trumpet (when he wasn't playing it) always held securely in the crook of his left arm as though it were part of him. Back in 1990, when the Merseys were celebrating their fortieth anniversary, I spent a delightful afternoon with him and the late Nobby Baldwin, gleaning information about their origins and early history in preparation for an article I had promised Stan Coram for the first issue of his new magazine, "Juzz Jazz". Their laughter and good-natured banter, and their obvious pleasure in one another's company, were highly infectious, and it's tempting to hope that they are together again, catching up ...

John and Frank Parr (who kept wicket for Lancashire at the time) were just a couple of enthusiastic followers of the sixteen-month-old Merseysippi Jazz Band when, in June 1950, its bassist and founder Dick Goodwin suggested they take up the trumpet and trombone respectively to replace Wally Fish and Dennis Gracey who had recently left. For three months they spent "every evening" with Dick at his home in Seacombe, teaching themselves to play, and then played their first gig at Harrogate RAF Association. "We were terrible!", John admitted, but he also explained how, during those three months, he had regularly sat in with the band alongside their temporary trumpet replacement, Bob Crossley, and his seemingly-inborn sense of harmony had enabled him to improvise second-trumpet lines with relative ease. Thus was born what became THE major hallmark of the Merseysippi right up to the time John retired in January of this year - the two-trumpet front line.

I once heard John's playing aptly described as "immaculate". He had obviously come a long way since that debut in Harrogate.  His trumpet partner for the first seventeen of the intervening years was the larger-than-life Pete Daniels, who died in 1987. If those THREE are together again there are definitely treats in store!

Thanks for the sad news about John Lawrence's passing.  A lovely trumpeter

Fred, So very sorry to hear today's sad news. John and the chaps played the soundtrack of my life in Liverpool and although it is a long time since I was there, the sense of loss is not diminished by distance. My thoughts are with Jasmine and all those close to him..... Thanks for the memories....

Hello Fred,  So very sad to learn of the loss of John Laurence.... what wonderful years he and the MJB gave us... recently I took my daughter to the Phil to hear the New Orleans night with Alain Toussaint.. she said to me ' they're very good dad' . to which I replied 'yes, but not as good as the Merseysippi in the in their prime'... and that was the case.. so thanks John, you will be missed. and all our thoughts will be with Jasmine

Very sad news to hear of John Lawrence's passing. John was a fine cornet player and a lovely man who would always find time for a chat when at a gig. I used to marvel at the two trumpet front line of the Merseysippi Jazz Band. Thank you John for all the inspiration, advice and great evenings of music.

Fred So sorry to hear about John. He was a fine musician and always the professional in appearance and performance. Carol and I shared his and Jasmine's hospitality at all of the Merseysippi annual festivals in Liverpool and at their home. He will be missed. Our thoughts are with Jasmine.

Hello Fred, I was sad to hear about the passing of John Lawrence. He was a nice guy and an all round good egg in jazz circles. I will never forget how patient and understanding he was when I was first introduced to him back in 1984 (Liverpool International Garden Festival), and he said "Never do outdoor gigs, they bugger your lip!". Good advice indeed, and I always have it running through my mind whenever I play outside now and wished how much I had adhered to his sage council. As I have mentioned to you in the past, not everyone I have met in the local jazz scene was welcoming to me when I was a young whipper-snapper. But this was not the case with John. He was always encouraging and complimentary, and had time to talk to people after a gig. It seems that with his passing, an era has come to an end in the Merseyside music scene. John and the lads were there before the Beatles and they were still there long after them too. I'll miss him and I'll never forget him.

So sorry to hear about John Lawrence. I got the word from Tony Davis, Mike Cox and Mike McCombe (an ex Mersey drummer).

Playing on Merseyside in the 1950s and 60s I ran into the Merseysippi JB many times and even auditioned with them at the Mardis Gras Club after Pete Daniels departed. I remember John as being the complete gentleman - always friendly and helpful. In fact at some session at The cavern I was complaining about having no chops and John gave me the best advice that I ever got from another musician. He told me to practice every day even if only for 10 or 15 minutes. I do this now and find when gigs are thin on the ground it helps me play the way I want to.

Many thanks John and I'm sorry to see you go.

I remember John as not only a fine trumpet player, but as a happy guy with a keen sense of humour and observation:

Many years ago I depped with the Phoenix Jazzband in the Westminster Hotel Chester, and John was playing trumpet. We were playing in the front bar because the main room was being renovated. During the playing of a fairly standard tune I was given a solo which took me by surprise and I launched into an addled solo that went everywhere except where it should. I finally got out of the mess I was in and we wound up the tune. At this point John observed with one of his delightfully wry smiles, that I was a sort of traditional jazz Thelonius Monk.

John was a part of the rich fabric of life, and it was wonderful to have met and to have known him.

On behalf of John's wife Jasmine, and her family, and all the chaps in the Merseysippi Jazz Band, I would like to thank all of those musicians and friends who turned out to give our dear departed friend John, such a rousing send-off. The marching band must have contained at least forty, which is hard to co-ordinate! Special thanks to the London contingent, John Barnes, Roy Williams and Campbell Burnap for attending. John would have loved it. I did not count them but there must have been at least a hundred and fifty present. The survivors of the Merseys are continuing to function every Monday at Liverpool Cricket Club.

They came to say farewell