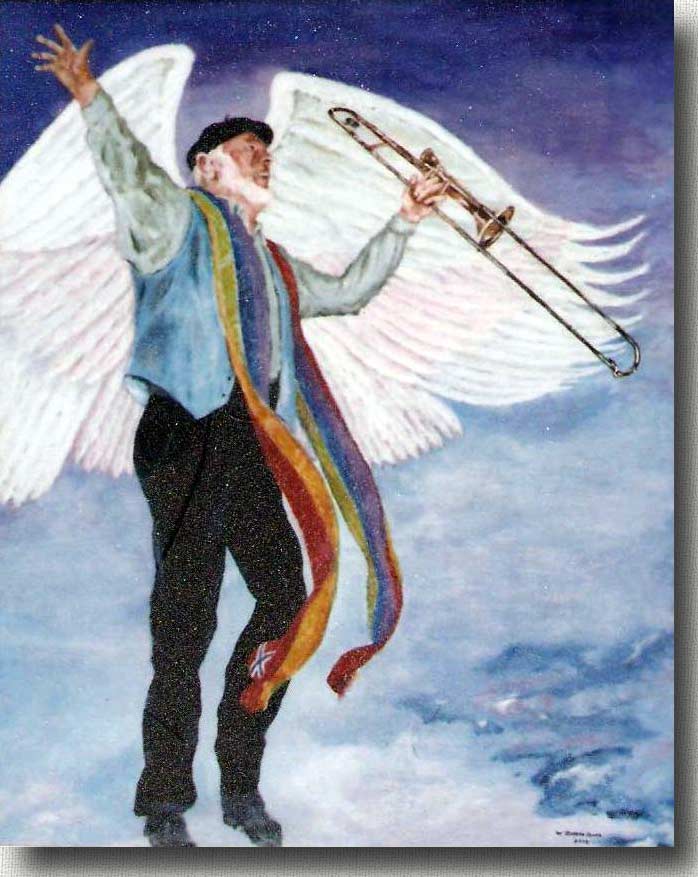 The Joy of Jazz

I count Terry as a very dear friend, and have done three portraits of him so far. I also painted two of his decorated trombones for him, the 'I'm Green' one & his MCFC one. As I support MUFC that was a chore! I am a very slow painter, and am working on Peter 'Pedro' Robinson, Dave Berry, & George Galway at the moment. At 81 I'm way ahead of Moe Green, & wonder if I'll manage to finish any of the present batch. I've done about 18 in all, some worse than others.

Here's a double portrait of dear Peter Barker, 'The Grand Jazz Parade Marshal', with his 'Ideal' marching band. Unfortunately, there's a ghostly reflection of me taking the photo, in the sky! 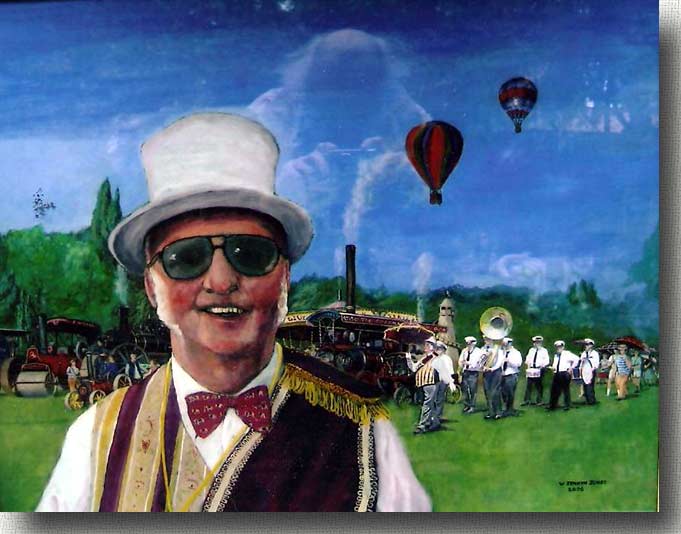 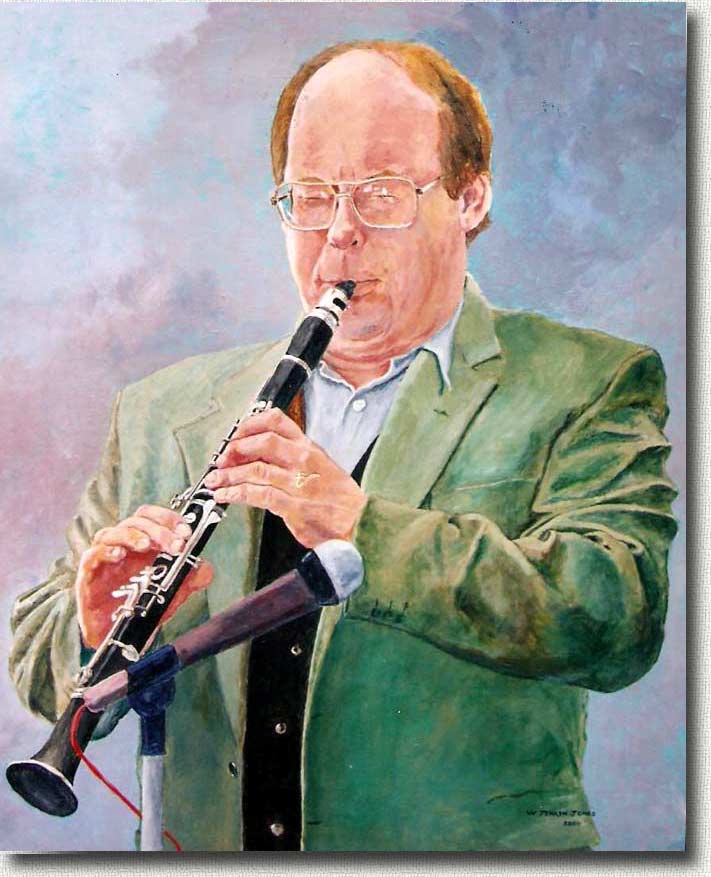 Mike Hayler is a great reeds player. I painted this one of him when
he was landlord of the Three Greyhounds at Allostock, in 2000. 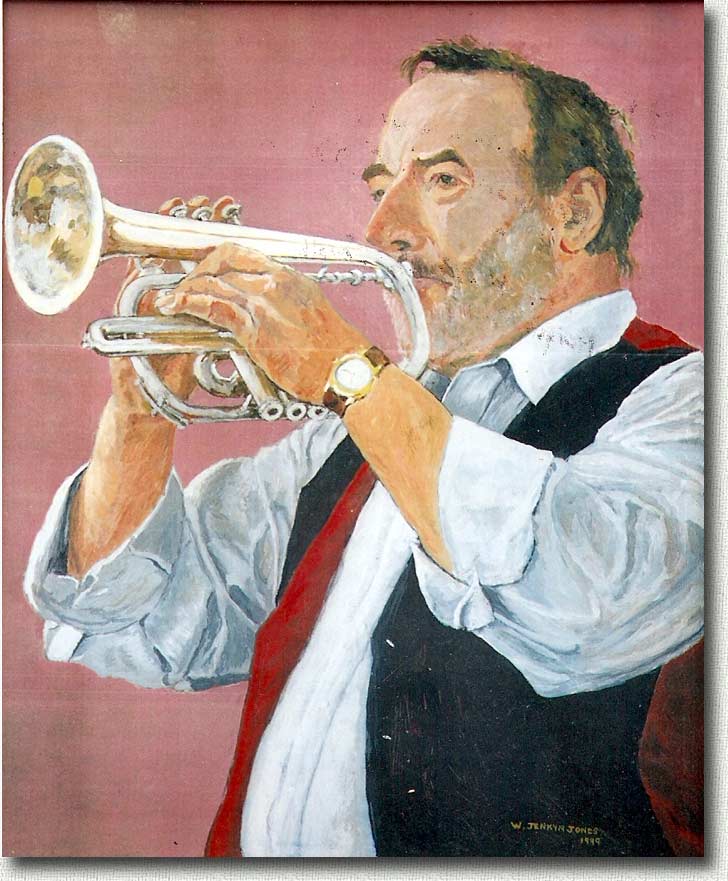 The very first of my Jazzmen. Geoff Wilde's kindness in encouraging a seven-year old
trumpeter, son of a friend of mine, inspired me to paint him, & that's how the series started.

His is the only original portrait I've given to the subject, the others have prints.
A lovely man. now retired to his roots in Flixton. We miss you Geoff! 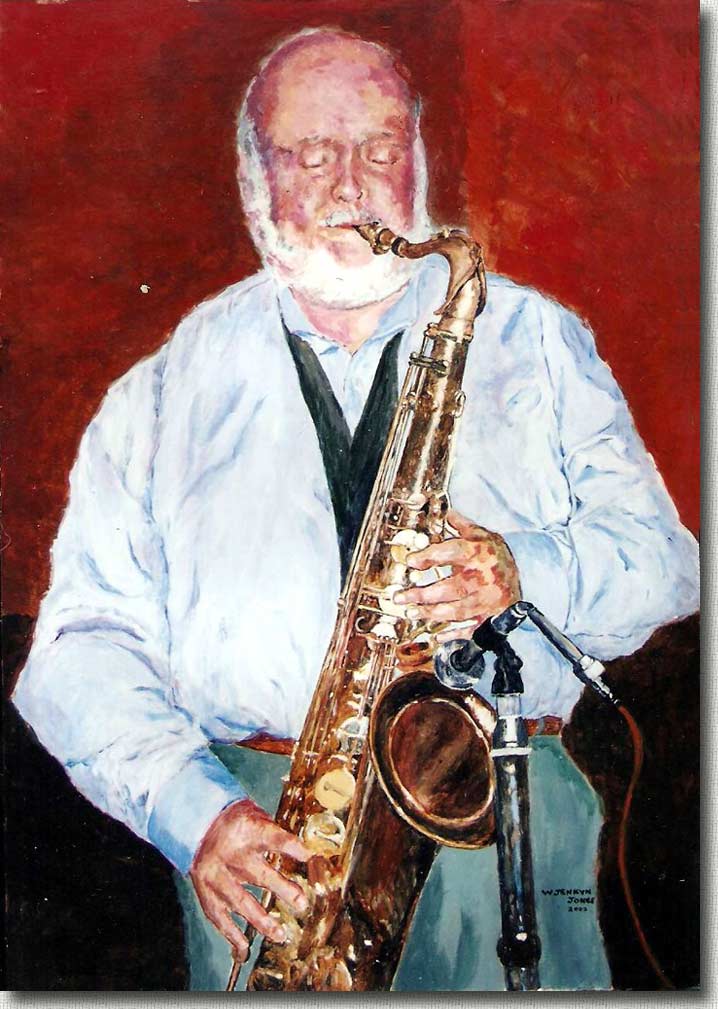 Here's Howard Murray, a regular multi-player with the Giants of Jazz, at the New Horseshoe in Alsager.
He's almost converted me to enjoying jazz post-(early)-Ellington! We have a common interest in linguistics.
I did this one in 2002. 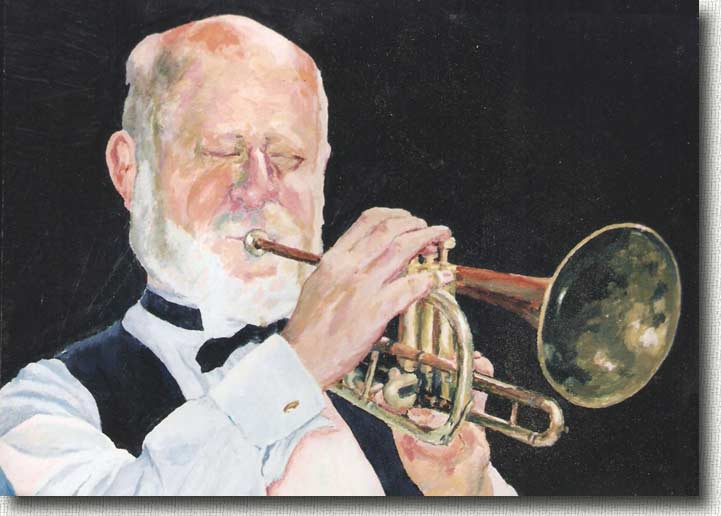 Ged Hone's grandfather's cornet is almost as well-known as the man himself, so I did a double portrait in 2002 !
They play together in so many bands I don't know where to start! 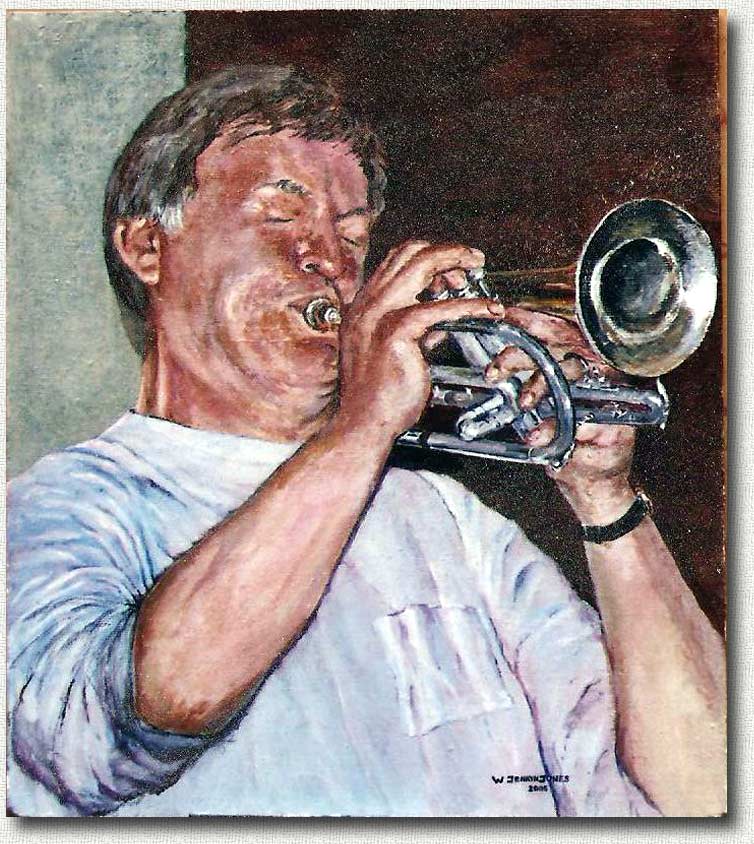 A posthumous portrait of Dick Wharton done in 2005.
He played cornet with the Salt City in Nantwich, & the Severnside
in Shrewsbury. He had a lovely tone, & was outstanding in his use of the mutes.
It's a privilege to have heard him in his prime. 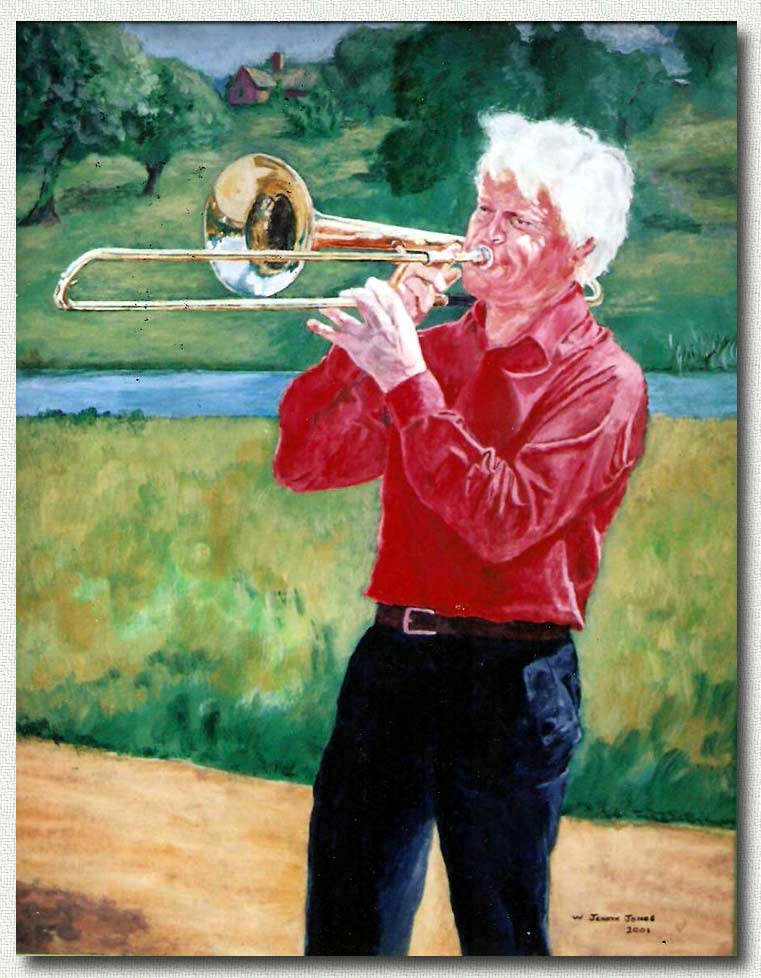 Alan Newton, a left-handed trombonist (No, the picture isn't the wrong way round!)
is a very long-standing member of the Salt City, & weekly programme compiler.
They play now at The Jolly Tar at Wardle, near Nantwich. This was done in 2001 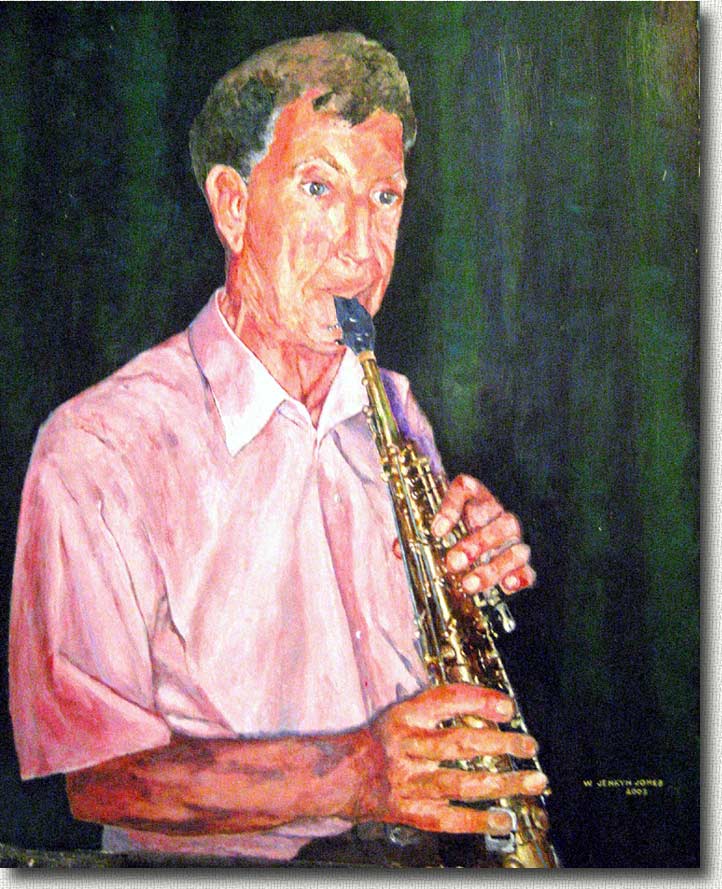 Harry Christian is well known in these parts for his reed-playing with the Salt City & Mercia bands,
& his depping with Willie's Weepers in Alsager. He's recently added a beautiful new
baritone sax to his armamentaria. This picture was painted in 2003. 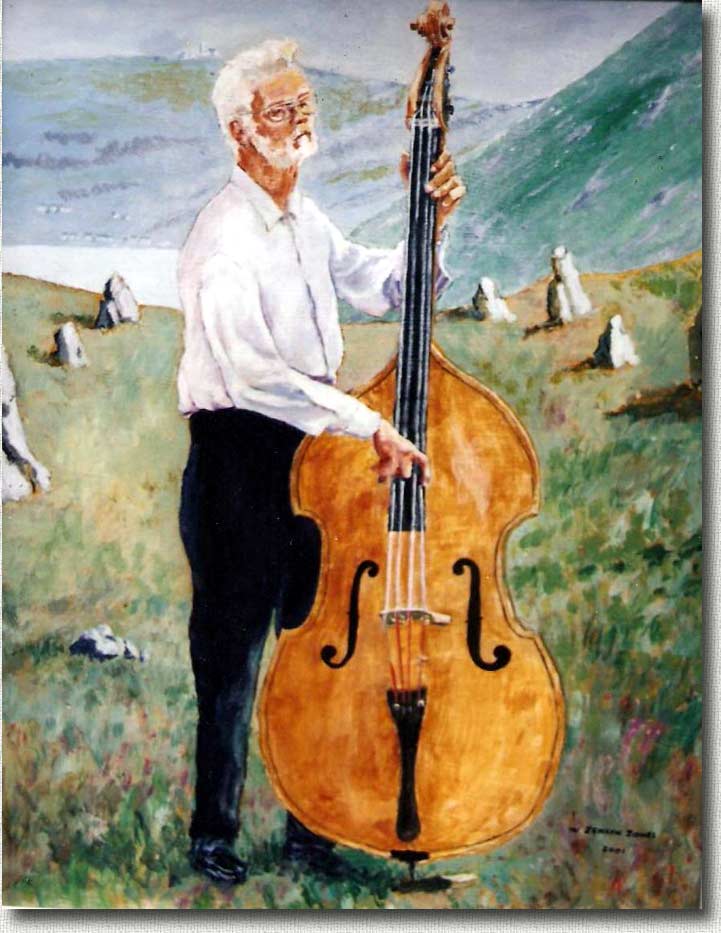 Here's Derek Pierce of the Salt City (2001). He's an archaeologist & a Welshman, so I painted him
in a Welsh druid's stone circle at map reference SH 722 746. He's never dug there though! 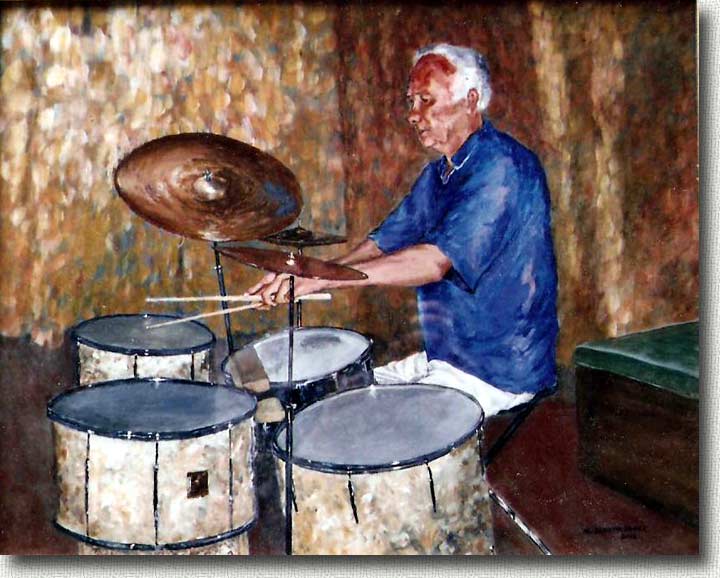 Bob Jones, another long-standing member of the Salt City painted in 2003 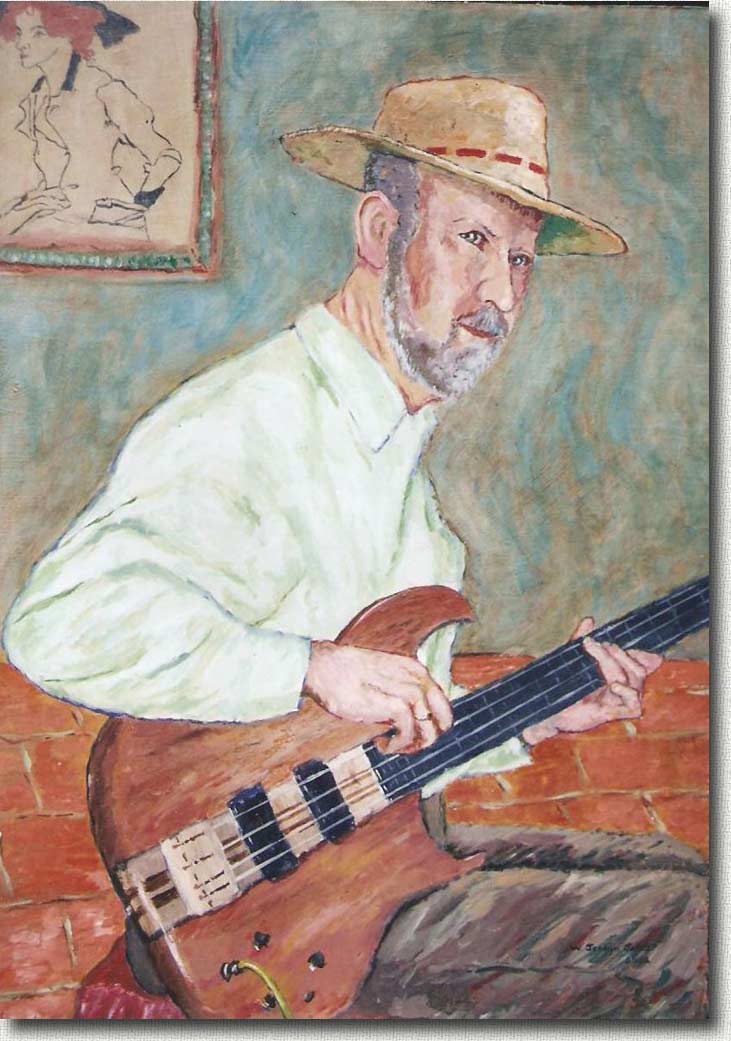 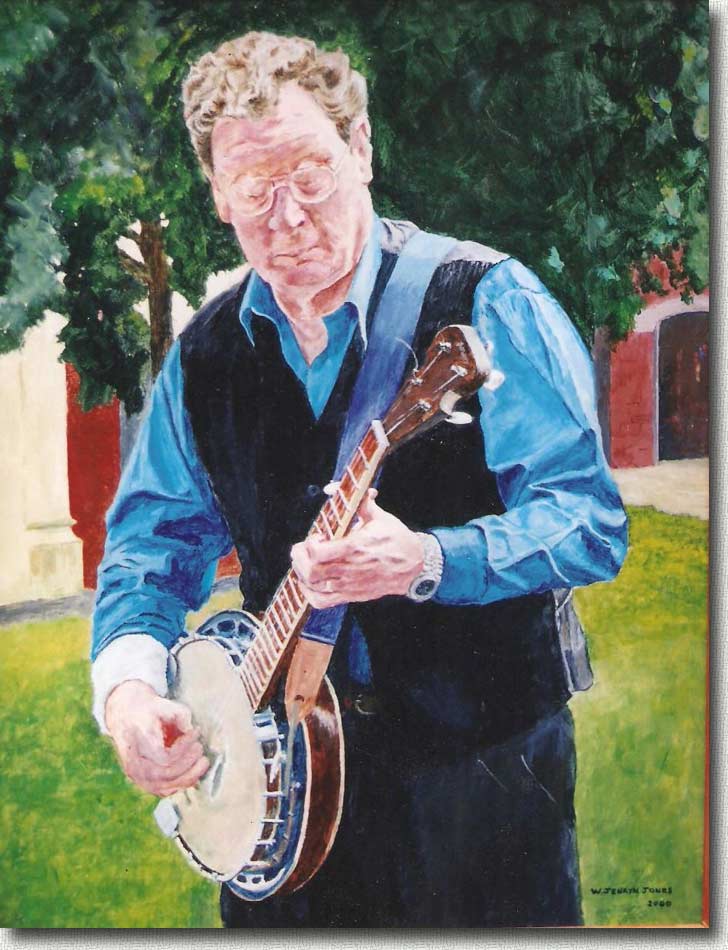 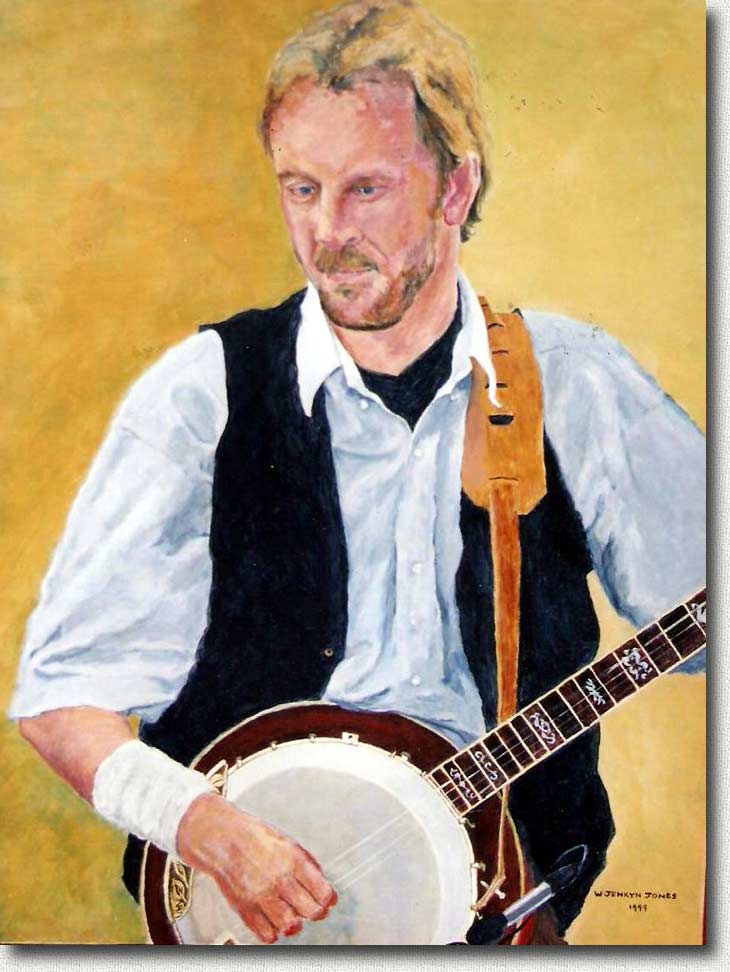 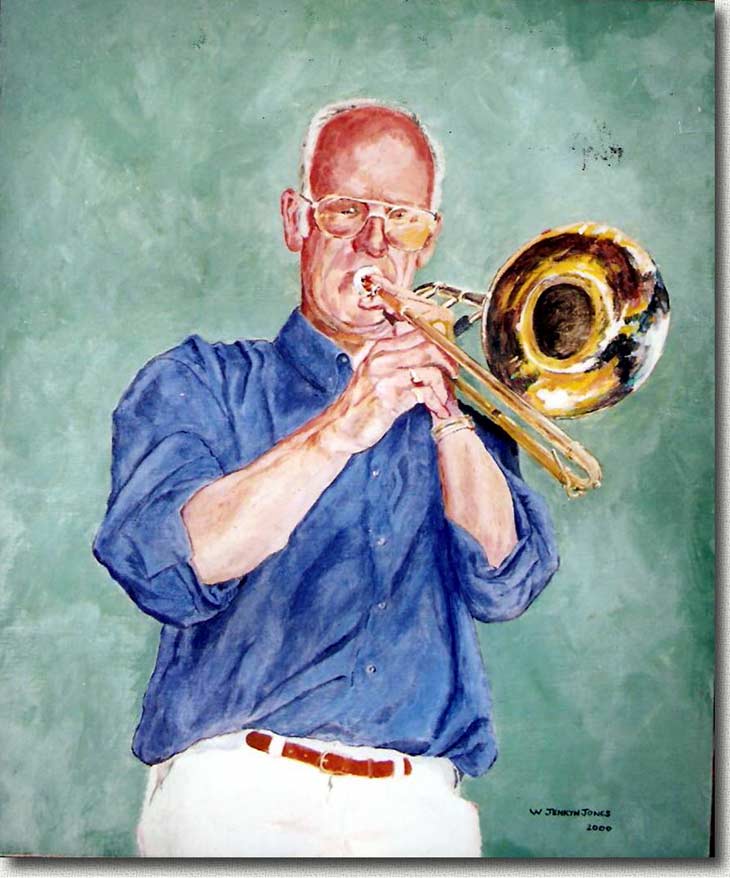