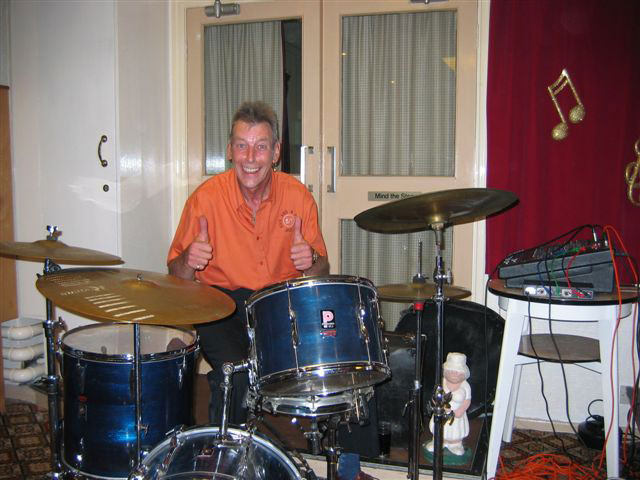 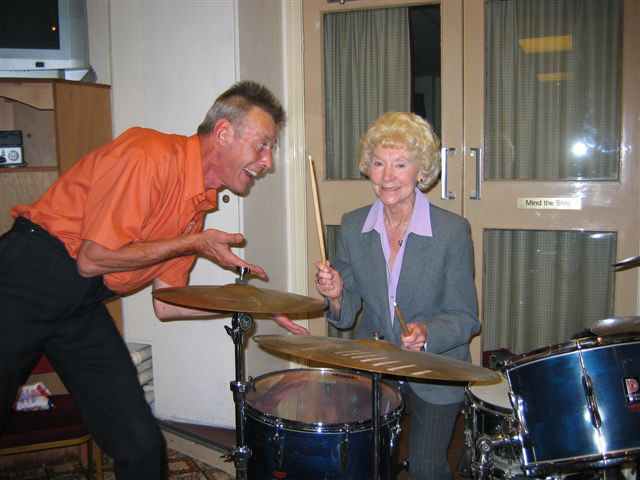 Chris Wright sadly lost his battle with cancer yesterday morning. Chris who was a mainstay of the Five and a Penny for nearly forty years will be greatly missed. His unique personality not to mention his incredible natural drumming abilities has brought him many personal devotees over the years.

I'm very sad to hear of the death last night of Chris Wright. He was an outstanding drummer, vocalist, and a real one-off character. He will be sorely missed by all who knew him, and my thoughts go out to his family and friends. He had a good musical start in life, his Dad being Vernon Wright, a wonderful piano player and character. Strangely enough, after a gap of about 27 years, I called in at The Spinning Wheel, at The Warren, between Buckley and Broughton, Chester, this morning, which is where I first met both Vernon, and Chris, not knowing that Chris was no longer with us.

There must be many stories about Chris that should be told, and it would be great if you could provide a tributes page to his memory, if at all possible.

Rest in Peace, Chris, although you'll certainly liven them up in Heaven.

Chris Wright has left the stand. A cracking drummer and a fine, funny, fun, gentle man.

I was so sorry to learn of Chris Wright's passing, truly his musical talent will be greatly missed. Many happy memories of both listening and playing with him in the Jenny Jones Hotel Llangollen.

11th April 2009 - To all the people who have contacted me, I hope to reply to you all independently. However a general thank you to everyone for their kind comments, I shall pass them on to his extended family, that includes the band of many years standing. The funeral will be at 1-00 at the Rhosymedre Church, Cefn Mawr. After the visit to the crematorium near Wrexham, there will be a get together at the Air Products Social Club nearby. Anyone will point you in the right direction. All are welcome to attend at any time. Musicians will be encouraged to play at the Air Products. Chris was always in favour of endless disjointed musical parties. Hopefully it will turn out to be 'his kind of thing' to celebrate his unique lifestyle and talents.

I was very sad to hear about Chris Wright. What a drummer he was, a real musicians drummer. He had an energy all of his own and was unlike any other drummer I've ever played with; a unique man. It can often be said that drummers are blokes you see hanging round musicians, but this was definately NOT the case with Chris. I'll never forget the first time I met him; we had been chatting for a few minutes and when I told him that one of my biggest influences was Ritchie Blackmore (heavy rock guitarist, formerly with Deep Purple and Rainbow) his face was a picture. It's not the usual response you get from a Jazz Trombonist is it? Chris was too young to be leaving us yet and it's a terrible thing that he is no longer with us.

How sad to hear that Chris has passed away. Chris depped with the Blue Mags numerous times over the years and he invariably stole the show with his superb vocals, his excellent drumming and his sense of fun and enjoyment that lifted audiences and us as well!

Two occasions instantly spring to mind which I think typify what a professional and a character he was. The first was when he played with Pottsy's band at Trevor Stent's farewell party. At the end of the evening he decided to put on an impromptu one man show, playing and singing some wonderful music for what seemed like hours much to the pleasure of those fortunate enough to witness it.

The second was more recent; the Blue Mags organised an event last year to celebrate 40 years playing. At the last minute, our drummer Fred had to pull out and we phoned Chris to see if he could help out. We knew he wasn't well but typical of Chris, he immediately said yes. Bear in mind this was a 12 hour session. The following day I was talking to the French band that had been on the programme with us and they were all amazed and impressed by his musicianship.

Our drummer for over 35 years, Tony Antrobus, died in 2005. It would be nice to think that Chris and Tony, two lovely fellas and two great drummers, were catching up on old times!

When Chris Wright first began playing with Five and a Penny in the early eighties, he was a tall, spare and imposing figure. The trademark little bell earring that he always wore was already in place, though partially concealed behind long, curly hair, and he used an enormous, bright red drum kit that included an impressive array of six or seven tom toms in a line. He wasn't really a jazz drummer, he explained: most of his playing had been with electric blues and rock bands, and so, just to be on the safe side, he would stick to brushes when playing with us. This may not sound like an auspicious start, but with his late father Vernon Wright on piano and his friend Dave Alexander on guitar his versatility soon reasserted itself, and he quickly became the mainstay of the wonderfully sympathetic swinging rhythm section with which I was privileged to learn my trade. As a drummer, Chris was every bass player's dream.

As the years passed his hair got shorter (in fact he shaved it all off one day for a charity bet and kept it short thereafter), and the big red drum kit was exchanged for a more modest blue one, but the man himself remained larger than life. Who can forget those masterly vocal performances with their surprising and often hilarious twists and interjections - Route 66 unexpectedly segueing into Surfin' USA as the beeping car arrived at last in California - Summertime with its 'lucky old' jumping fish - his magnificent rendition of Burt Don's Sinatra adaptation, Her Way - The Lady being a Tramp because her garden was full of marijuana plants?

Chris was a great and unforgettable musician, and a marvellous entertainer, but he was also a generous, warm-hearted man who seemed to have discovered the secret of perennial youth. My sons, who have known him all their lives and to whom he was a 'favourite uncle', stared at me in disbelief when I told them recently that he was approaching sixty, which somehow makes his passing seem all the more tragic. What I would give for just one more session!

I was sorry to learn of the death of Chris Wright. He was an excellent musician and gave a huge lift, as drummer and entertainer, to any session he played on. "Young At Heart" was one of his particularly fine songs, and who could forget his version of "Oh, You Beautiful Doll" (... let me put my arms around you, blow you up and then I'll mount you....)?  Condolences to his family, friends and musical colleagues. He gave us a lot of good music and fun.

Sorry Chris, can't make it - otherwise committed. Will be thinking of you on Monday - thanks for so many happy memories, never to be forgotten. God bless you Chris.

How sad I was to hear of Chris's death. I have enjoyed playing with Roy and the 5 Penny Piece many times and always enjoyed Chris's drumming. singing, general performance and company. My sympathy to his family and to Roy and the band. I shall miss the funeral, being on the high seas at the time but I, nevertheless feel a great loss to jazz and fun. With the sadness, I hope there will be fun in "Celebrating the Life"- as there would be if Chris were there.